ETH Miners Will Have Little Choice Once Ethereum 2.0 Launches With PoS Zcens 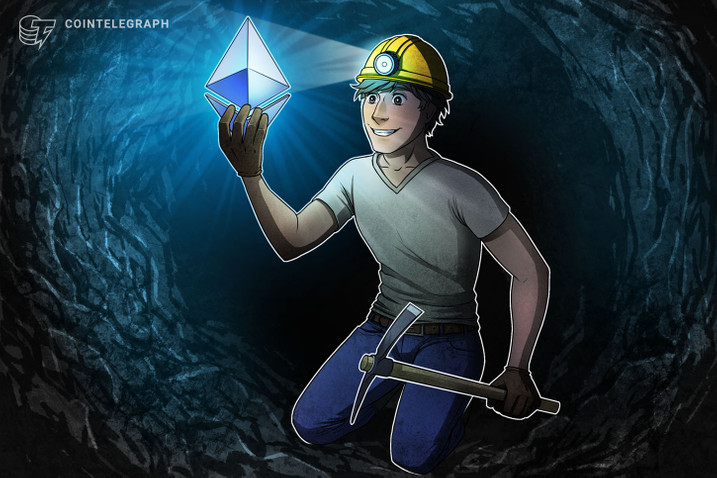 Once Ethereum becomes a proof-of-stake blockchain, what will happen to the ETH miners, and what will they do?

As Ethereum is finally set to launch its Ethereum 2.0 upgrade later this year, putting an end to a long streak of delays, the network will start moving toward a proof-of-stake model.

Consequently, the network will abandon the proof-of-work consensus algorithm, leaving Ether (ETH) miners with very few options. Since their equipment will become obsolete, they will be forced to start mining altcoins, or recertify as ETH stakers. So, what is the current state of ETH mining, and what exactly will happen to the industry as a result of the upcoming transition?

The Ethereum consensus is currently based on the PoW system, which is similar to that of Bitcoin (BTC). Therefore, the mining process is nearly identical for Ethereum, as miners use their computation resources to earn rewards for each block they manage to complete.

However, there is still a major difference between these processes. While Bitcoin mining has become almost entirely reliant on ASICs — large, loud machines designed specifically for cryptocurrency mining that are mostly clustered in regions with cheap electricity — Ethereum’s PoW hashing algorithm, called Ethash, has been designed to favor GPU units issued by global chipmakers like Nvidia and AMD. GPUs are much cheaper and more accessible than ASICs, as Thomas Heller, the global business director of cryptocurrency mining pool F2Pool, explained in a conversation with Cointelegraph:

“Because ASICs are very specialized machines, when a new generation is released, it’s often a huge technology jump. So, their hash rate is much higher, and energy efficiency is better than the previous generation. That means that those manufacturers have spent a lot of money to research and develop it. Their machines are often quite expensive, while GPUs are a lot more affordable.”

Heller added that those using GPU miners “have much more flexibility in what you can mine.” For instance, an Nvidia GeForce GTX 1080 Ti card — a popular choice — can mine more than 15 different currencies, while ASIC units normally support just one currency.

Nevertheless, the Ethereum network is not entirely immune to ASIC miners — at least, in its current state. In April 2018, Bitmain released the Antminer E3, an ASIC produced specifically for mining Ethereum. Despite being a widely successful model that boasts a hash rate of 180 megahashes per second and power consumption of 800 Watt, it has received mixed reactions from the Ethereum community. A substantial part of GPU rig owners seemed to have suffered from loss of profits once ASICs were plugged in, while some were even forced to switch over to different networks.

“Its in the Whitepaper that ETH shall be ASIC resistant. I hope said whitepaper stands for something” was one of the top comments in a r/EtherMining thread discussing the Antminer E3 around the time it was announced. “800 usd only for 180mh” a different Reddit user argued. “Hardfork or die eth.”

Some Ethereum users went on to suggest that Bitmain’s mining device can lead to greater centralization and thereby increase the chance of a 51% attack. Soon, a group of developers proposed “programmatic proof-of-work,” or ProgPoW — an extension of the current Ethereum algorithm, Ethash, designed to make GPUs more competitive, thereby promoting decentralization.

According to a March paper co-authored by Kristy-Leigh Minehan, a co-creator of the ProgPoW, around 40% of Ethereum’s hash rate is generated by Bitmain ASICs. Alejandro De La Torre, the vice president of Poolin — the sixth-largest pool for ETH — confirmed to Cointelegraph that “GPU mining is still dominant” for the Ethereum network, adding:

“At present, the profit of ETH mining is not high, and the management threshold and cost of GPU devices are higher than that of Asic devices. Compared with Asic devices, however, GPU devices are more flexible as in, you can switch to other coins with different algos.”

ProgPoW has not been integrated into Ethereum yet, and it is unclear when it will eventually happen — in March, core Ethereum developers were debating whether ProgPoW would actually benefit the network for almost two hours and failed to reach a consensus. Notably, a Bitmain representative previously told Cointelegraph that the mining hardware giant doesn’t plan to extend Antminer E3’s lifespan to operate after October 2020: “As far as we know, mining will approximately end during October or sometime after this.”

Indeed, Ethereum will move away from mining in the future. Scheduled to launch later in 2020, Ethereum 2.0 is a major network upgrade on the blockchain that is designed to shift its current PoW consensus algorithm to PoS where miners are virtual and referred to as “block validators.”

More specifically, they are randomly selected with the consideration of users’ wealth in the network, or their “stake.” In other words, the more coins PoS validators choose to stake, the more coins they accumulate as a reward.

According to Ethereum co-founder Vitalik Buterin, the network will become more secure and costly to attack than Bitcoin’s as a result of the transition, although the debate over which consensus algorithm is better has been around for years in the crypto community. However, it’s still unclear when the launch of Ethereum 2.0 will take place, as numerous bugs and management problems are reportedly delaying the process.

Another supposed benefit of a PoS system is that it’s much more energy-efficient than PoW blockchains. According to data from Digiconomist, the cryptocurrency’s annualized total footprint is 59.31 terawatts per hour, which is comparable to the power consumption of the entire country of Greece. However, Bitcoin might not be as bad for the environment as it seems thanks to a July 2019 report that estimated 74% of Bitcoin mining is done using renewable sources of energy.

What will happen to actual Ethereum miners? According to the documentation of the Casper upgrade that is part of the Ethereum 2.0 roadmap, the network will initially support a hybrid model that would involve both PoW and PoS, therefore, leaving some space for both block validators and GPU/ASIC miners. “There will certainly be a transition period where both networks are running,” Jack O’Holleran, the CEO of the Skale Network — a blockchain platform based on Ethereum — told Cointelegraph, elaborating that this process will take some time:

“It will certainly take time for the majority of ETH1 to transition into ETH2 — potentially years not months. The good news about the slowness of this transition is that DApps and DeFi platforms will be able to move over at their leisure based on real-world evidence of viability, security and adoption. This is a net positive for the Ethereum ecosystem.”

To mine or not to mine?

Once Ethereum runs fully on the PoS rails, miners will have two options. One is to sell the equipment and use that money to accumulate more ETH and start staking, while the other option, which is available exclusively for GPU miners, is to simply switch over to other Ethash networks and mine altcoins. Nick Foster, a representative for United States-based mining equipment dealer Kaboomracks, told Cointelegraph that most ETH miners will pick the latter option:

“I would say most miners are not really into mining to get ETH or a specific coin. Yes, a certain number mine and hold, but I would argue against the notion that a large population of altcoin miners hold their coins for any amount of time.”

Foster went on to describe how he switched to mining Ravencoin (RVN), an Ethash peer-to-peer blockchain asset, with his 3GB GPU unit once it became unprofitable to mine ETH: “It’s mining raven, and I sell to BTC instantly for stability sake and sell to USD to pay my power right after. I would say lots of people are employing a strategy like this.”

As Foster summarized, he expects ETH miners to hop off the network, while new players — those who didn’t invest in the power infrastructure or the rigs — will be staking ETH. He described the following scenario:

“I can’t imagine how much of a dork I would be if I found a five-year lease with $0.04 power, and I was mining ETH and I decided to sell everything and just keep paying my lease so I could stake ETH as a replacement.”

Marc Fresa, the founder of mining firmware company Asic.to, agreed with that sentiment in a conversation with Cointelegraph: “If you’re invested into mining, you don’t want staking since you have the buildout for it.”

One of the major altcoins that might benefit from PoW miners leaving Ethereum is Ethereum Classic (ETC), a more conservative version of the blockchain that reportedly has no PoS-related plans. Since it also runs on the Ethash algorithm, its hash rate might experience a significant spike as a result of the potential miner migration caused by the Ethereum 2.0 launch.

Larger mining pools for ETH are left with similar options. When asked about his company’s post-PoW plans for Ethereum, Heller told Cointelegraph that F2Pool launched a sister company called stake.fish earlier in 2018, following the Ethereum PoS upgrade announcement. Because the switch has been delayed numerous times, stake.fish has started offering staking services for other PoS and delegated PoS projects like Tezos (XTZ), Cosmos (ATOM) and Cardano (ADA). As for Poolin, it “may temporarily give up supporting ETH mining,” as a result of the transition to PoS, De La Torre told Cointelegraph.

Will the rest of the network notice?

As for Ethereum’s ecosystem at large, experts reassure that the transition to PoS will be conducted in an uncomplicated fashion, and network participants — casual users and decentralized applications built on top of Ethereum — will hardly notice the change. Viktor Bunin, a protocol specialist at blockchain infrastructure firm and Libra Association member Bison Trails, echoed that sentiment in a conversation with Cointelegraph, adding:

“The Ethereum mainnet we know today is expected to be added as a shard on ETH2 in Phase 1.5. All that will change is the consensus mechanism, so DApps and users shouldn’t notice any change.”

Bunin went on further stating that: “Any concerns that the network will split, with some folks remaining on the PoW chain or that DApps will experience disruption, are overblown.” Furthermore, O’Holleran told Cointelegraph that “ETH 2 is a new network that will run on a new token and a new inflation model,” elaborating:

“The connection is that it will all be composable and compatible with the Ethereum ecosystem and that tokens from the first network can be burned and replaced with tokens from the second network. What this means is that DApps and users will not be directly impacted until they manually switch networks. The indirect and immediate impact will be in relation to how the supply and perceived value impact the price of tokens on both networks.”

As for now, it is clear that there shouldn’t be a shortage of Ethereum block validators. According to a recent report by cryptocurrency analytics firm Arcane Research, the number of Ethereum wallet addresses that include or exceed 32 ETH — the minimum amount required for staking — is approaching 120,000.